Check out our web site www.gathertheoutcasts.com for upcoming events, audio messages, pictures of mission trips, and other contact information.

Dear beloved:  After you have asked the Lord to speak to you, and then you receive from Him the still, small voice, the dream or vision, or the revelation through His word, the next step in walking into your destiny is to step out in faith, and put into action that which He is calling you to do.  Habakkuk 2:1 I will stand on my guard post, And station myself on the rampart; And I will keep watch to see what He will speak to me, And how I may reply when I am reproved. v2 The the Lord answered me and said, " Record the vision,  And inscribe it on tablets, That the one who reads it may run. v3 For the vision is for the appointed time; It hastens toward the goal, and it will not fail. Though it taries, wait for it; For it will certainly come, it will not delay.  v4 Behold, as for the proud one, His soul is not right within him; But the righteous WILL LIVE BY HIS FAITH.

James, in his short epistle, had much to say about putting faith into action.  James 2:14 What use is it brethren, if a man says he has faith, but he has no works? Can that faith save him?  v17 Even so faith, if it has no works, is dead, being by itself. v18 But someone may well say, " You have faith, and I have works; show me your faith without the works, and I will show you my faith by my works."  v19 You believe that God is one.  You do well; the demons also believe, and shudder.  v20 But are you willing to recognize, you foolish fellow, that faith without works is useless?  And the Apostle Paul says in his letter to the Ephesians, that as followers of Jesus Christ we are created for the good works.  Ephesians 2:10 For we are His workmanship, created in Christ Jesus for good works, which God prepared beforehand, that we should WALK IN THEM.

Every kingdom action, no matter how great or small, requires us to step out with that measure of faith that we have been given, and move the kingdom forward in whatever way God has called us to move.  Last night at the prison revival, after a time of praise and worship, the Lord started to give me words of knowledge about some afflictions of the ninety men in the room.  I stepped out in faith and called out the words of knowledge, one for men with sciatic nerve and lower back pain, and the second for men with right ankle and right lower leg pain.  Both words brought a response and several men came forward for prayer.  One of the young men that had ankle pain gave testimony later that he had severely sprained his ankle several years earlier, it had swollen up size of a soccer ball.  He had been living with the pain all this time; but after we prayed for him, the Lord gave him immediate healing and relief from the pain, and he was very excited to announce his healing to the whole group before we left last night!  Stepping out in faith pleases God, and when you step out, He will give you more works, and even greater works to help move the kingdom forward.  Hebrews 11:6  And without faith it is impossible to please Him, for he who comes to God must believe that He is, and that He is a rewarder if those who diligently seek Him.   Beloved, what is God calling you to do today? Whatever it is, step out in faith and you will bless the Lord as well as yourself.  May God bless you as you pray this day.  in Christ, Jim  www. gathertheoutcasts.com 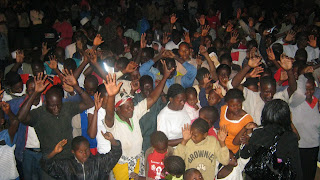 Posted by Gather the Outcasts at 11:29 AM